The teal is gone, long lived the teal

This post is brought to you by hours of research on color palletes on Pinterest, and an impulse decision to buy a new shower curtain. But first, the background.

When we bought this house, we intended to rip it down, or at least gut it and completely renovate it. The existing paint colors were never considered when making our decision to buy this property. So the fact that the color scheme, inside and out, house and garage, living space, kitchen, hallways, bedrooms and baths, was teal green, pink and white, really did not matter. When we had to come up with plan B, and live in the house without a complete reno the teal was among the first things to go - that and the pink plush carpet in the bedrooms.

With one exception. The main floor shared bathroom kept it's teal green paint color as it waited for it's total make over. Well, we've been here almost 9 years, but that make over could come at any minute (if we bought lottery tickets), right?

The shower curtain was in need of replacement and I was looking for something that wasn't brown or beige. I was at the local WalMart, and the selection was pretty slim, but I settled on a geometric pattern in greys and mauves, and also bought dark purple bath mats.

When we were shopping for our first home, our realtor Sally Munro described the  '80s decorating phenomenon of light purple bathrooms in the homes of middle aged women as 'menopause mauve'. It's just one of those descriptors that sticks with you. When I was a kid, purple was my favorite color. I had a purple bedroom once upon a time. We've always used color liberally in our homes, but we have never used purple. Til now.

On Saturday morning, the main bath looked like this: 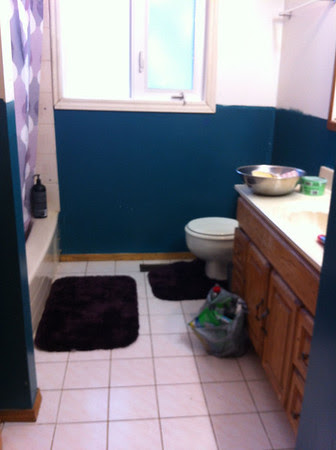 There had been a wall paper border separating the teal and white, but I removed that long ago. The vanity looks like it's been riden hard and put away wet, as do the light fixture and taps.

The previous painters didn't bother with painters tape and so there was teal on the edges of the shower tiles, in the grout between the counter top and wall. They painted the door pull on the closet bifold door with this teal. It was just everywhere!

I've been spending quite a lot of time looking at color palettes because the time has come to redecorate most of the main floor. I love the bright gold that we have on the walls, but I've been trying to find a great blue palette. What I've found no end of are teals, light teal, dark teal, blue green, what ever you want to call it, it's too close to the pervasive shade that once ruled this house.  I've also seen a lot of gray. Gray just wouldn't be a first choice for me, but I thought I should find out if I could grow to love it.

So almost as a joke, I put 'repaint bathroom' on a list of possible suggestions for what to do this weekend. And now, the bath looks like this: 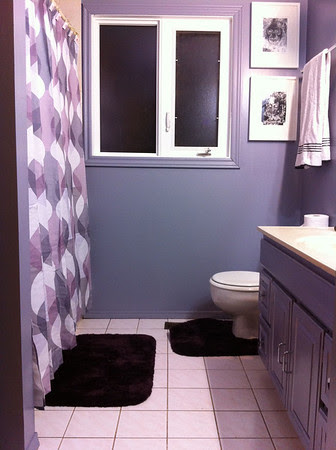 To my delight, the teal covered really easily, and we only needed one coat. The wall color is "Pewter" and we splurged on a metallic paint  for the cabinet and mirror. It's a little too close in tone to the pewter or else it picks up/reflects it too well, as it is almost tone on tone. I kind of wish I'd picked the much darker version. It's only sold in gallons too, so we have a crap load left over.

We bought a package of 'tile' stickers; basically mactac, and installed that as a make believe backsplash: 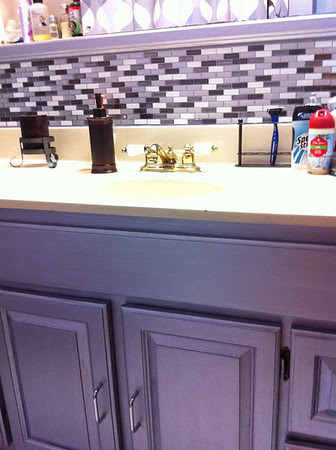 And we replaced the wooden drawer pulls with silver.

Now, this little face lift doesn't solve the fact that the cabinet is barely holding itself together. It hasn't replaced lights or taps, both of which desperately need to be done. It doesn't solve the improperly grouted floor tiles or get rid of the ugly peach colored ones of the tub surround. It doesn't give us a proper tub, with a drain plug, so that it can be used as a tub.

But it gets rid of that gawd awful teal. The last teal standing. Gone. Perhaps now I'll be able to look at a blue green palette and not want to vom. Improvement. Victory. Even if I've replaced teal with menopause mauve.

Posted by Unknown at 8:49 PM No comments: