Dinner Out, in Suburbia

There's a new joint on the block out here in suburbia; Hart's Table & Bar - a Century Hospitality Group property - in the old Ric's Grill location on 23 Avenue. And it's a much needed addition, as anyone that has tried to go for dinner after 5 p.m. in Terwillegar knows all too well. The supply of seats does not meet the demand.

We decided to give them a try last night when we hatched a plan to grab a burger with our good friends Chris and Kathy - a fairly spur of the moment casual night out in the burbs to catch up with friends. Hart has only been open a week and does not take reservations. We arrived at 6:45 to quite a significant wait, but after learning that there was a similar wait over at Delux Burger Bar, we opted to give the new place a try. And I'm really glad we did.
I hadn't been to Ric's Grill for several years before it closed, but if my memory is correct most of the layout of Hart is the same as it was as Ric's. One huge improvement is that the windows are no longer covered by stuffy black curtains. The lounge area is inviting with large sofa's and big raised tables. I think my favorite bit of decor was the wall paper in the washroom though!
The menu's (available on line) are a little more upscale and diverse than the competition (Delux and Original Joes) in the neighborhood, a welcome addition to the local choices. The food was very good. I had the 'Tomahawk' Pork Chop and it was tasty and juicy. I nibbled on the DHs Century Kaleslaw that came with his Fish and Chips and it was delicious, as were his fries.
The other BIG thing that Hart has going for it is it's beer selection. Fat Tire in bottles. Delirium Tremens on tap! Just a couple favorites from among the extensive list. I can imagine Hart becoming a favorite based on beer list alone. 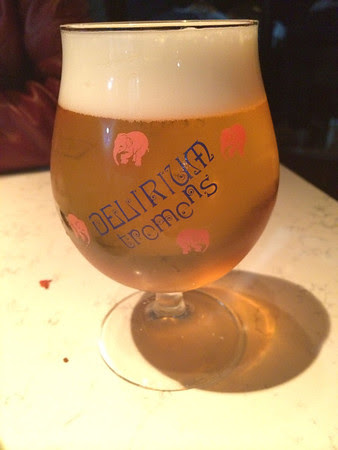 I look forward to warm summer evenings out on their patio sampling that grand list. Welcome to the neighborhood, Hart, and (though I'm quite sure you will be) I wish you much success.
Posted by Unknown at 2:18 PM